Information in the Cultural Imagination

Grade Received: A
To see my process story and reflection on this work, please click here.

This assignment involved creating a prototype based on David Kirby’s concept, the diegetic prototype, which he describes as “cinematic depictions of future technologies… that demonstrate to large public audiences a technology’s need, benevolence, and viability” (43). This prototype was then implemented in a story outline using Brian David Johnson’s “How to Build Your SF Prototype in Five Steps or Less,” with the goal of better understanding how fiction impacts the way we think about difficult questions.

Dreamcatcher: A New Technology to Catch Your Dreams and Your Desires

Step 1: Pick Your Science and Build Your World

Catalina, a Torontonian student, struggles to study in her family kitchen. She constantly switches from her readings to her manuscript, which is currently suffering the effects of writer’s block. Agitated, Catalina begins researching ideas for her manuscript.

Her mother comes home and asks whether Catalina has finished studying for the day. Catalina says she will study after finishing her manuscript’s daily word count goal.

Her mother complains that she is paying for Catalina’s tuition so that Catalina can focus on school and get a good job, not waste her time on this hobby of hers. She warns Catalina that following her passion would turn her into her father, who followed his passion in the arts and is now working as an underpaid freelancer. Catalina and her mother get into a fight, with Catalina saying her mother cannot control her, and her mother saying she only wants Catalina to get a proper job instead of vainly working on something she is not even good at.

A hurt and furious Catalina storms off into her room. While browsing the web, she sees an advertisement for Dreamcatcher, a device that records people’s dreams. Catalina reads the reviews and it apparently works, with more than a thousand reviews and a 4.5-star rating.

The Dreamcatcher is a headwrap wearable technology that users wear while sleeping. It monitors the users’ brain waves and sends this data, which the company calls “Dream Dust,”[1] to the company cloud. The dream videos can be accessed online on the Dream Portal by logging on to a personal account. The device advertises itself as something that lets users watch their dreams and in turn, discover their innermost desires (Freud).

Catalina remembers a friend suggesting she could harvest some inspiration from her dreams, but she never remembers them enough to write them down. Catalina, desperate to find inspiration for her novel and make her breakthrough as an author that would prove her mother wrong, clicks “Buy Now.” 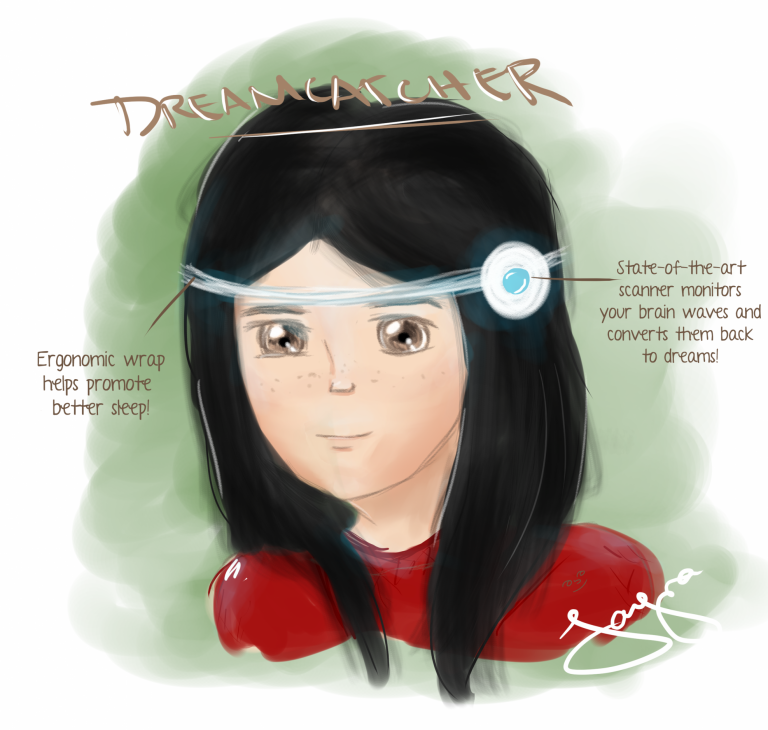 The Dreamcatcher device as advertised.

Catalina’s package comes that night. After charging it, Catalina turns it on with an easy tap of the blue button, puts it on, and sleeps.

At university, Catalina shows her new gadget to her friend, Maria. However, Maria seems disturbed. She explains that many employers now request to see applicants’ dream videos before deciding to hire them.[2] If they do not have a dream video to show, or if they refuse to show it, they may get rejected from the job.

Maria asks to see Catalina’s dream video from last night. Catalina, slightly anxious of what she could have dreamed about, fires up her Dream Portal. In it is a video of her as a terrorist. Underneath the video is an icon to share the video to her friends, but there is no way Catalina would ever share this. Frightened and baffled, Catalina closes the Dream Portal.

On their way to class, they encounter a student telling his friend that he switched from Engineering to Political Science. He apparently found his calling after seeing his dream video where he was a politician.

That night, Catalina goes home where her mother greets her and announces that she bought a Dreamcatcher as well.

Step 3: Ramifications of the Science on People

Catalina begins noticing that her dream videos and online advertisements seem to match. One dream video showed her eating a burger. Coincidentally, a burger advertisement also came up later that day. But she is on a diet and now she is craving a burger even more. Perhaps that is why that dream occurred – the Dreamcatcher recognized that she was on a diet and a fast food company decided to take advantage of it.

However, what bothers Catalina is she thought her dream videos were private. She has not shared them on social media at all. Catalina searches Dreamcatcher online and discovers that people have been discussing how the company has been sharing its users’ dreams without apparent consent. They have been talking about how the Dreamcatcher is akin to Google and Facebook.

Some say that Dreamcatcher is like Google, a master of surveillance capitalism. That means Dreamcatcher’s success comes from how it predicts human behaviour (Zuboff 4). It does this by sending users’ Dream Dust to advertisers, who analyze the dreams and bet on what their potential customers would do in the future (Zuboff 4-5).  However, unlike platforms like Facebook, Dreamcatcher users do not have to pay attention for their data to be extracted; their dreams are perpetually being mined (Vaidhyanathan 81). Especially considering Sigmund Freud’s claim that dreams reveal people’s innermost desires, this intimate human experience of dreaming, which is sold to advertisers, becomes more predictive and thus, lucrative (Zuboff 11).

Catalina reads Dreamcatcher’s policies but finds them unreadable. Catalina sends the policies to Maria, who specializes in Public Policy, and asks her if she could read them. Maria tells Catalina that the text looks like it had been especially constructed to be hard to read, but from what she can dissect, Dreamcatcher has some oppressive privacy text that says that user’s personal information can be shared with third parties to make “predictive analyses and sales,” among others (Zuboff 21).

Catalina takes the car and speeds on the highway. Not long after, a policeman catches her and asks for her license. Upon seeing her name, the policeman explains that Catalina has been flagged due to her dream video where she dreams of being a terrorist.

Catalina says she has no intent of making that a reality. However, the policeman does not believe her. At first Catalina fights back, but the policeman manages to handcuff her and take her to his car. Catalina complains that this is wrong – why should the police trust her dream video over her character (Andrejevic 9)?

The policeman apologizes nonchalantly and says that it is better this way, since is difficult to trust humans. According to him, humans can abuse and break trust, which is hard to depend on. For example, at a stop sign, people trust that others obey the rules. But what is really monitoring that? Why are there still accidents related to that? When a citizen who was trusted as law-abiding turns out to be a terrorist, now what? The policeman claims that total surveillance and monitoring are the solutions to a well-functioning society. He looks at Catalina and tells her, “And we don’t want any more terrorists in Canada now, do we?” (Andrejevic 9).

Catalina arrives at the crowded detention centre and is detained there until further notice.[3]

Catalina wonders whether the terrorist dream video is even real, or was it hacked in? How safe are Dreamcatcher’s servers, anyway? What is the extent of technology manipulation and misinterpretation? What if a burger company simply hacked her dream video to make her crave a burger?

What about those students who switched programs just because of their dream videos? Yes, the device claims to realize one’s innermost desires, but is it right to depend on technology to that extent?

Catalina observes the other detainees. She asks herself whether total surveillance is the answer to society’s growing fear toward terrorism and mass shootings, as well as dissipating trust toward one another. Would infiltrating their most intimate selves like dreams be ethical? Catalina slumps on the bench and falls into a deep slumber, off to a dreamworld where it would only be her, her dreams, and a surveillance camera.

[1] This renaming of users’ behavioural surpluses is inspired by how Google and other companies may calls theirs “digital breadcrumbs” (Zuboff 7).

[2] This new rule takes inspiration from total surveillance and how technology is now used to make decisions when recruiting employees (Andrejevic 9).

[3] This part, along with when Catalina was flagged for her dream video, have been inspired by US President Donald Trump’s catch-and-detain policy that supposedly captures illegal immigrants and detains them for long periods of time, thus invoking fear to almost never step foot outside of the house (Rosenberg and Levinson).