This project uses the AR design tool Wiarframe to prototype a retail environment where proxemic interactions explore two design themes, namely deception (dark design) and privacy invasion. I decided to create a design that continuously tries to capture the target’s attention to lead him/her to a certain store. In this case, I decided to use the Pokémon character, Bulbasaur, to lead the target to the video game store, EB Games.

When sketching my designs, I focused on the two design themes: privacy and deception (dark design). I mostly wanted something that deceives people into buying something or unknowingly paying an extra fee. However, the problem with my original sketches was that they did not really showcase proxemic interactions well.

When the person finally reaches the store that the object is trying to lead the person to, and the person purchases a product from that store, the person will also be asked to pay extra for “playtime” with the object.

Worth noting is that the object or character changes depending on the target person. It will change depending on the person’s public and private information on social media or gaming accounts. For example, if the person likes Pokémon based on his Facebook profile, the character shown may be a Pokémon character like Bulbasaur. 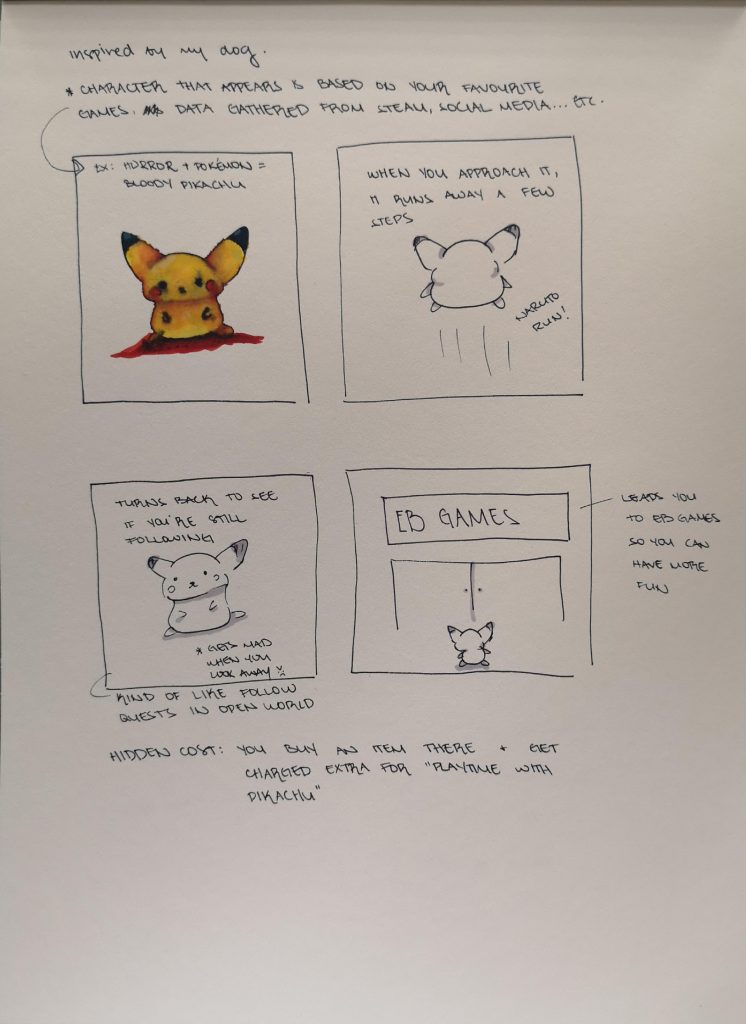 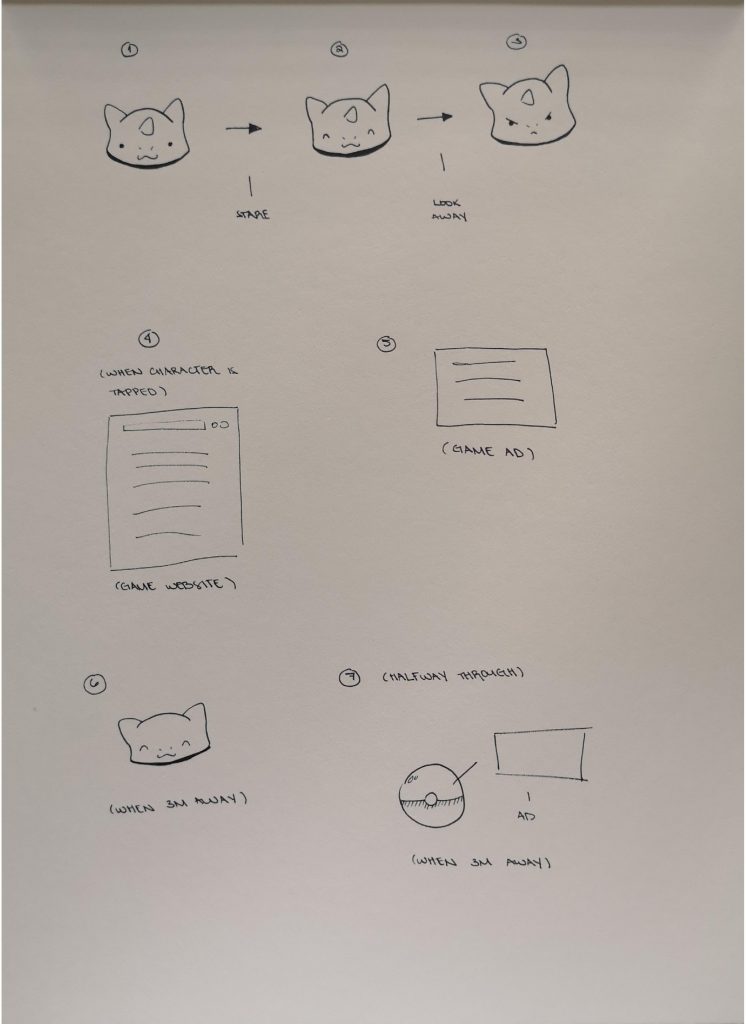 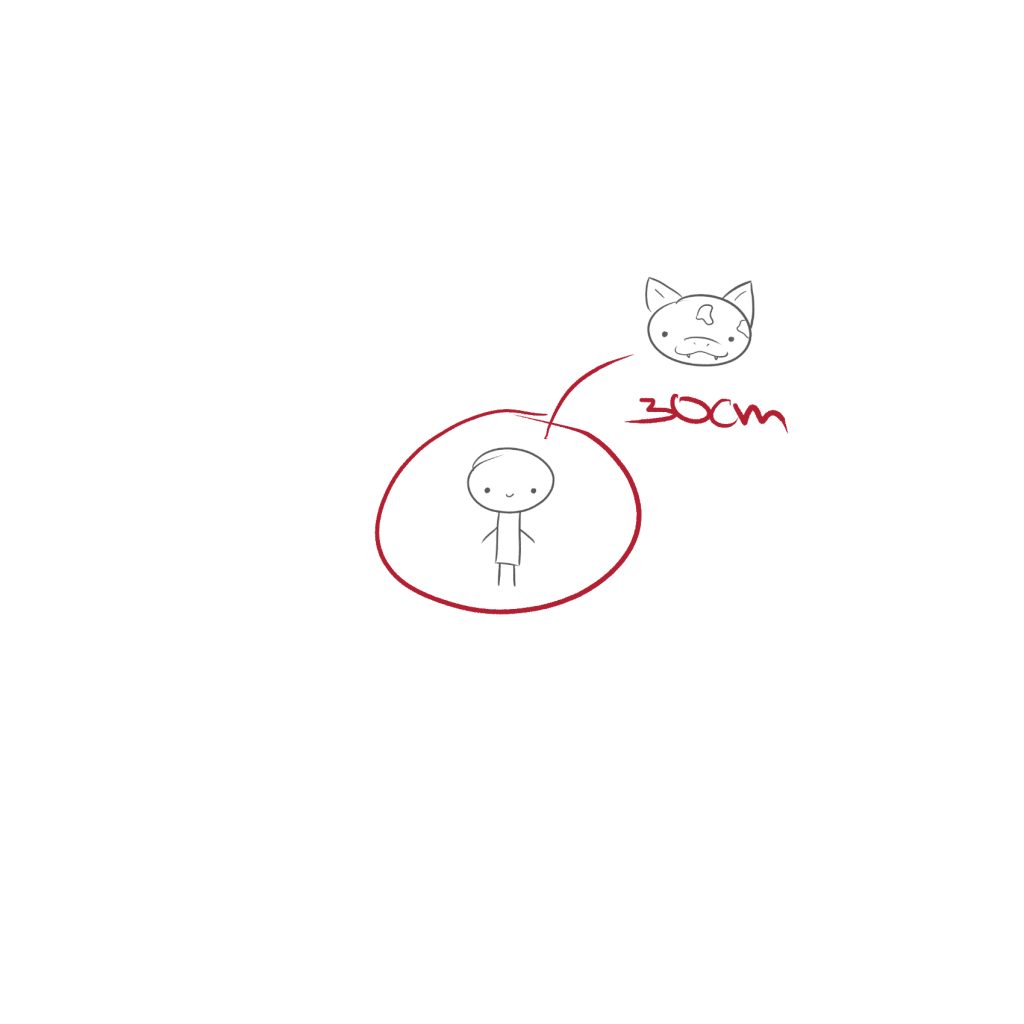 The tool Wiarframe gave me the opportunity to prototype an AR retail environment. Although the tool was relatively easy to use, the fact that it was an online tool and I did not have the best Internet connection made it a bit more clunkier and difficult to use. The program was also limited in what I could and could not do. For example, I wanted to do repeated interactions that allowed the AR object to run-wait-run-wait, instead of just run-wait. I also wanted to incorporate sound effects. However, the program did not allow me to do that, so I instead added it in post-production in a video editing tool.

The interaction technique I am trying to illustrate is one that shows how design can be implemented to “manipulate” people into doing anything, including going into a store that they originally did not plan to go to in the first place.

I think that my design shows the importance and value of people’s attention. Especially in the digital age, where people’s attentions have become a sort of currency, businesses are now trying everything they can to capture and retain potential customers’ attention. They can do this by sneaking in advertisements on Facebook or YouTube, for example. Sometimes, businesses even tailor their advertisements according to each specific person’s wants and needs to really capture their attention.

By becoming more aware to these “tricks,” people can become less susceptible to falling for these advertisements and designs, which may even have some dark design incorporated into them.

Overall, my experience from sketching to protoyping my ideas on Wiarframe made me realize how relatively easier it is nowadays to create something that is meant to capture people’s attention. That is why it seems that everybody nowadays seems to be fighting for customers’ attention. However, awareness to this notion, I think, is the first step to protecting ourselves from falling for these tricks.